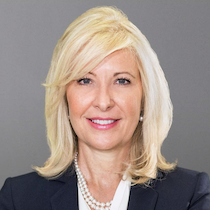 From 2015 to early 2019, she was the Chief Compliance and Regulatory Affairs Officer (CCRO) and with this role, was appointed to the Credit Suisse Executive Board. In this position, she oversaw Credit Suisse’s compliance and global regulatory environment, as well as the banks’ policies and controls.

From 2010 to 2015, she was the Chief Financial Officer (CFO) for the Investment Banking (IB) division and a member of the IB Operating Committee. Since 2013 up until her appointment as CCRO, she was also the Chief Operating Officer (COO) for the IB division. Prior to her CFO and COO roles, she was the Global Head of Fixed Income and Economic Research, and also served as Head of US Equity Research. Lara Warner joined Credit Suisse in 2002 as a senior equity research analyst covering the cable television, wireline and wireless telecommunications services and satellite industries.

Prior to joining Credit Suisse, Lara Warner was a senior research analyst at Lehman Brothers, where she covered the cable television industry. Before joining Lehman Brothers in March 2001, Lara Warner spent 10 years at AT&T, where she held a number of leadership roles including Director of Investor Relations and Chief Financial Officer for AT&T's Competitive Local Exchange business unit efforts in the US.