Slavery did not end in the 19th century.  Modern Slavery refers to institutional slavery that continues to occur in present day society.  Modern Slavery is not something that just happens to those people, far away in other countries. Every country is affected, not just developing countries. It happens on the magnitude of a global crisis. Modern Slavery takes many forms including child exploitation, organ trafficking, sexual exploitation and forced labor. Today, there are more slaves in the world than ever before. Estimates of the number of slaves today range from around 38 million to 46 million, depending on the method used to form the estimate and the definition of slavery being used. Modern Slavery is a hidden and complex crime, making it difficult to estimate the enormity and hard to contain.

The Joint Alumni Forum invites you to a revealing (perhaps somewhat disturbing) yet important message about Modern Slavery with keynote speaker Jeetendr Sehdev followed by a panel discussion. Jeetendr is a world-renowned marketer, speaker, best-selling author, public thought leader, and a passionate activist for modern slavery. He is quoted as having said “It’s my Responsibility to use my fame for Good” (Oxford Alumni Stories published 29 January 2019). 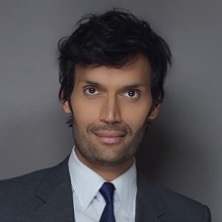 Jeetendr Sehdev works with the United Nations to help raise awareness and promote efforts to combat modern-day slavery.
Jeetendr was born and raised in Bristol, England. He graduated from Oxford University before moving to Boston to attend Harvard Business School. He began his career in advertising at Ogilvy & Mather in NYC where he built some of the world’s most iconic brands including American Express and Dove. He is a dual British and American national, who lives in LA.
Described by Variety as "the best in the business" and Harper’s Bazaar as “the most relevant voice of the social media era,” Jeetendr Sehdev is the New York Times bestselling author of The Kim Kardashian Principle, the world’s leading celebrity branding authority and an internationally renowned speaker. A trailblazer in pop culture and branding insights, Jeetendr has become one of the most prominent figures in celebrity news and a sought-after advisor to top international companies. His fresh, provocative and eye-opening message of being free and fearless to live up to your greatness has been featured in major media including The Today Show, CNN, FOX, ABC, CBS, NBC News, and more.

As a “Social Responsibility Committee” of the Harvard Club of Switzerland comprising representatives of the Swiss Alumni Clubs of Harvard, Oxford & Cambridge, Stanford, Yale and Columbia University, we have designed a forum for discussion, education and debate on various themes encompassing social responsibility. The themes for the series encompass equality issues (gender, race, minorities), human rights, refugees and environment/sustainability. The outreach for the speakers series is broader than exclusively the alumni of universities in the collaboration, but also like-minded representatives of institutions and members of the public. If you would like to participate in various projects emcompassing social responsibility (i.e. sustainability, etc.) you can contact joint.alumni.forum@gmail.com.

ECOFACT has been helping clients understand ESG risks, since 1998. ECOFACT also provides the leading research on regulatory changes pertaining to sustainable finance and corporate responsibility. By combining market-leading research with unique advisory experience, ECOFACT strives to be a catalyst in the transition towards a sustainable economy.